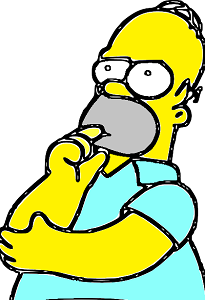 In for a penny, in for a pound, right? Well, no. Extreme thinking and behaviour does no-one any favours. When we lean to the extremes, we never see what we are missing out on inbetween.

I used to suffer from Borderline Personality Disorder, so I made these all-or-nothing judgments all the time. People were either good or bad. Things were either great or awful. I had to do things my way, or it was no dice at all. I knew nothing about compromise or meeting in the middle. It didn’t even cross my mind that there might be any middle, where better choices were possible.

If you suffer from thinking things must be totally black or completely white, consider how varied nature is. What defines a cat? A tail, whiskers, fur, and a purr? Well, what about tailless Manxes? Or the hairless Sphynx cat? Look at a blade of grass. Is it always green? Sometimes grass can be yellow, brown, or a mixture of colours.

If nature isn’t that simple, why would you think people, relationships and situations are? The more you practise actively looking at variations, the more you’ll be able to see that things are rarely black or white, unless they happen to be a chess set.

2. To Hell With Consequences

Now this was me all over. I was always chasing short-term solutions and instant gratification, which is why I ended up as an alcoholic. I had an anxiety disorder and drinking was a quick and dirty way of covering that up.

Did I ever think about the consequences of that? Hell, no. I just wanted to stop being so scared all the time. It is understandable that we think in this way when we’re in severe mental or physical pain, but short-term thinking often leads us into terrible long-term consequences.

The things I lost from my short-term solution included friends, jobs, relationships and even the majority of my pancreas.

If you can think about the consequences of your actions and behaviours, you are likely to avoid a lot of long-term, and sometimes even permanent, damage.

No, it’s not a faddish new dance routine; knee-jerking is when you react to something or someone quickly without really considering the situation.

It’s a kind of short-cut out of actually having to think. Many people become automatic knee-jerkers, immediately deciding their reaction to a situation based on past experience – even if all the signs are that this is not the same situation.

For example, if a friend says something slightly 'off', a knee-jerker will immediately get offended and possibly even retaliate on the spot. It is much better to pause, breathe, and consider things before choosing a wise way to respond.

Don’t get trapped in automatic knee-jerking. It will lose you a lot of friends who may have meant no intentional harm. It will also keep you stuck in the cycle of never thinking things through. Respond rather than react, and your life will get a whole lot less angry, and your mental horizons will get a lot broader.

Do you find yourself following the crowd? Why? Do you think everyone else must know something you don’t?

Did you know that an awful lot of people don’t actually have much common sense? Seriously, I know some people in Mensa who spout some absolute twaddle.

It’s important to form your own, evaluated opinions rather than just thinking what everyone else thinks. After all, you are an individual, so why would you cling to the same ideologies as other people just because?

I’m a Buddhist, although most of my friends are not. I chose to become a Buddhist because it aligned naturally with my heart and the way I think. The Buddha himself said not to follow him, but to test out his ideas for a way of life, and see for yourself if they suit you. That is the best advice I have ever heard from any school of thought.

Try different ways of thinking about things, until you settle on something that brings you peace and makes you happy (if that’s what you want). And don’t worry what anyone thinks about it. They may not have learned to think for themselves yet anyway.

5. Putting Yourself in the Wrong Order

I decided a long time ago that I was far less important than anyone else. I put myself last whenever I made choices, considering other people’s happiness before my own. People always commented on how nice and considerate I was, and I valued that for a long time.

But I wasn’t really a nice person. I was a nice doormat, letting other people tread all over me. And deep inside it made me feel sad, helpless and sometimes even angry.

You should always respect and care for other people, but not if it means sacrificing your fundamental needs. You can still be kind and considerate – in fact, it’s great to be that way, in my opinion – but don’t do it at your own expense.

For example, why should you give up your seat on the bus for someone with a broken arm if you happen to have a broken leg at the time? Yes, I actually did that in my doormatty days, and yes, my leg took a lot longer to heal because of my consideration/stupidity.

Equally, don't think that you are more deserving than anyone else and that you can trample over others just because they are kind.

Don’t think of yourself as less than anyone else, nor more than. We all have the right to meet our fundamental needs, and in that we are equal. Don’t ever think you’re at the bottom of the pile. And don’t think anyone else is, either. There is no such thing when we are all just human beings.

You and your needs matter as much as anyone else’s – please never think otherwise.