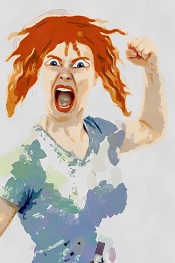 I have times when I get really angry. Most people wouldn't believe that, as they generally know me as a chilled-out person who doesn't easily get stressed.

Actually, what I am is the sort of person who doesn't get angry or distressed for no good reason – and I used to be completely the opposite. I used to take anything and everything very personally. Criticism, thoughtlessness, call centres, and people letting me down would make me utterly enraged.

But these days, I've come to see those things for what they really are, and that's nothing for me to get stressed and angry about. We don't live in a smooth and easy world. These are just normal parts of life and interaction with people, who all have different hang-ups, points of view, and difficulties of their own to contend with. Everyone is just trying to get by, after all.

But there are legitimate reasons for getting angry. If someone lies to you, mistreats you, or hurts you, you have every right to be angry. Injustice, cruelty, and maliciousness are not things to be tolerated or endured. But the truth is that holding onto anger poisons you. So once you've felt the swell of rage, deal with it and let it go.

Here's how to let go of anger:

Take a look at the list above. Queues, people just doing their job, and certain human flaws and frailties, are just part of life. You should only be angry if someone has been deliberately cruel, unfair, or hurtful towards you or someone else. Sometimes you have to label things as nothing personal, only someone else's 'stuff', and just move on. Realise that these things are rarely meant to be malicious, but are just a matter of someone not knowing a better way of handling themselves. But if someone hurts you and you realise you can't just get over it, move onto step two.

Putting your side across can help clear the air and get all that needs to be said out in the open. But it's vital to do it in a way that is fair and doesn't antagonise anyone else, otherwise you're compromising your integrity, sinking to their level, and likely to cause hostility or defensiveness in the other person. So instead of shouting the odds, say your piece kindly. Acknowledge any responsibility you had (if you did have any). Be honest about the impact on you, but don't go into a whole barrage of criticism towards that person. Deal with one thing at a time. Say something like "It really hurt me when you spoke to me like that this morning." Keep it simple, harmless, and true.

There is nothing wrong with laying down boundaries, asking for what you need, or even taking action yourself in order to avoid the same situation happening again. Again, avoid shouting or escalating the situation. Make sure you do the right thing at all times. Do not fall into the trap of criticising the person who has angered you or calling them names. That'll just turn into a game of blame and recrimination. Instead, use a neutral tone to ask for what you need in future. "In future, please would you speak to me with respect, and I will do the same to you."

Once you've done your absolute best to deal with the problem that was making you angry, it's time to let it go. You may notice along with the rage a certain amount of bewilderment or grief. Notice them, but whatever you do, don't dwell on them, and don't carry on picking over the situation in your mind. It's done now, and you've done the best you can to deal with it with integrity. Sometimes we need to cry, write, or go for a walk to get rid of that excess energy caused by anger and its accompanying emotions. Doing some breathing exercises can help, making the out-breath slightly longer and exhaling the anger as you do so. Whatever you do, enjoy the peace that comes from having done the right thing. Do good, and you'll feel good.

Put things into perspective. Are you really going to let one person's words or deeds ruin your entire day? Decide to take control of your own mood and destiny. Make a plan to treat yourself and have a good day despite what has happened. What could you do to feel better about yourself? What would be the very next thing you could do right now to make your day better, more enjoyable and more fun? Do it, and let the memory of what was angering you fade. Put it behind you, exactly where it belongs – in the past. You can't change the past, after all, so why not focus on having a fab day from this moment onwards.

by Beth Burgess, Therapist and author of The Recovery Formula, The Happy Addict, and What Is Self-Esteem?